Our clients in Newton Mearns had moved into their new home in January this year and really wanted a concrete effect porcelain tile, but without the cold hard floor surface.

The house was stunning, and as it was only sixteen years old it still had the original flooring. The kitchen was a really large open space, and our clients were happy with the design and layout but were unhappy with the colour and feel of their floor.

The floor was a dark grey, almost black, hard cold slate. With three children – a 9 year old, 2 year old and 5 month old baby – they were concerned that if any of the children fell over they would hurt themselves on such a hard floor. In addition, with winter coming, they wanted something warmer and softer underfoot. The grouting had begun to come loose as well, so every time they cleaned the floor parts of it were coming up.

As it was real slate, it was also very difficult to clean as dirt became ingrained into the rough surface. Finally, one of the tiles was cracked and so they felt that now as the time to change the floor before their youngest child began crawling. The clients didn’t really know exactly what they wanted, but they wanted something that wouldn’t show up dirt and crumbs as much as a dark floor, and it needed to be waterproof and scratch proof with the children in the house. They didn’t want a real wood as the rest of the floor either side of the kitchen was a very good quality oak effect laminate.

They chose several finishes in the shop but when we took them to their home, they completely changed their mind as different lights showed up different elements of the flooring. One of the ones they were interested in the shop looked too green in their home – which just goes to show the importance of seeing samples in situ. We recommended Moduleo flooring which is a luxury vinyl and very competitively priced in comparison to other well known brands. It’s very warm underfoot, a click system so is to easy to fit, and could be fitted on top of the existing slate with an underlay over the top. They opted for a concrete effect which has an almost silvery metallic sheen on it. They felt that it would lighten the kitchen and open up the space in comparison to the dark slate.

They didn’t want a wood effect as they wanted something that would not clash with the maple units and go with the granite worktop. In addition they felt it would look better against their white kitchen furniture. Our fitters arrived and managed to fit their new floor in just half a day. Our customers were thrilled with the results and feel that it is so much easier to maintain and clean, and they are no longer worrying about the children hurting themselves! If you are interested in Moduleo flooring, contact First Floors. We can come to your home with samples so you can see them in the light of your own home. Check out these before and after images! 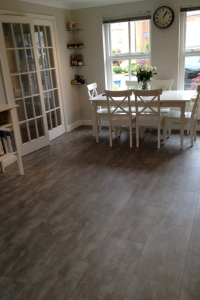 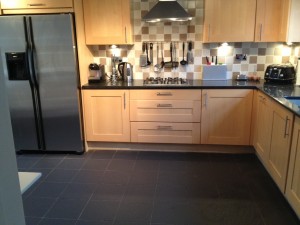 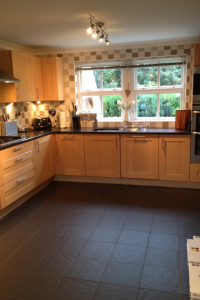 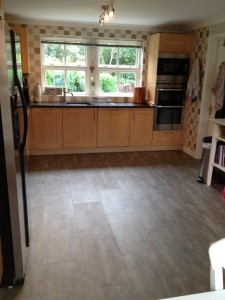 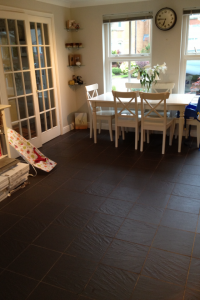 🌟🌟🌟NEW YEAR, NEW FLOOR 🌟🌟🌟Home improvement is a great way to kick off the new year and to help with that we will be giving you all 𝟭𝟬% 𝗢𝗙𝗙 𝗔𝗟𝗟 𝗙𝗟𝗢𝗢𝗥𝗜𝗡𝗚 starting today until Sunday 30th January 2022!Pop in store today, 📍178-180 Fenwick Road Giffnock, G46 6XF ... See MoreSee Less

🎄🌟☃️ 𝗖𝗛𝗥𝗜𝗦𝗧𝗠𝗔𝗦 𝗢𝗣𝗘𝗡𝗜𝗡𝗚 𝗛𝗢𝗨𝗥𝗦 ☃️🌟🎄Wednesday 22nd December: 9am - 2pmThursday 23rd December - Tuesday 4th January: ClosedWednesday 5th January: Open as usual A big thank you to all of our customers this year. We hope everyone has a wonderful Christmas and even better new year! Warmest wishes, the Team at First Floors ... See MoreSee Less
View on Facebook
· Share

We are in love with Moduleo Persian Walnut 😍The dark rustic tones of this flooring combined with the texture creates a warm and welcoming space 🌟 ... See MoreSee Less

As we put a challenging year behind us, Elle Decor asked designers what trends will be forecasted moving forward into 2021 🌟Neutral palette mixed with strong bold colours and relaxed and cosy seating areas 😍 ... See MoreSee Less

🌟 We would like to take a moment to thank all our customers for their business this year, we know it's not been the best for most so we really appreciate it 🌟 The First Floors team wish you all a Merry Christmas and a Happy New Year! 🎅 🥳💚🎄Hope to see you all back in 2021!🌟___FESTIVE OPENING HOURS 2020/2021Wed 23rd-Sun 3rd: ClosedMon 4th: Back to normal hours ... See MoreSee Less

TrustPilot
We recently had First Floors install laminate flooring in our lounge and hallway and are absolutely delighted with the final result! It has been finished to a high standard with great attention to detail.

Having had a rough idea of what we were looking for, David helped find the perfect flooring for both rooms.

We were booked in quickly and kept informed throughout the process.

We would definitely recommend and use again.

TrustPilot
Wee have recently had a new laminate floor laid in our upstairs hall. We are very happy with the result and feel the level of workmanship and finishing detail was excellent

TrustPilot
Excellent service from first point of contact. Staff took time to discuss and review options, then worked to suitable timescale based around my schedule.
Work completed on time and to a very high standard, delighted with results.

TrustPilot
Honestly so chuffed with my new floor. Everyone has been so helpful especially after I ran into issues on my end and had to delay getting my skirting on - everyone I spoke to has been so flexible, the joiner who fit the floor was really pleasant and quick too. Highly recommend!
5
Excellent